The most sought after games for every android smartphone are PUBG, Pokemon Go & Fortnite. In this post, we are going to download and install Fortnite on LG Tribute Empire / Dynasty.

To download the Fornite apk we have to use the Mobile Browser.

I’m using the Chrome browser. I searched for the term “Fortnite Download” as shown above.

The first search result takes us to the official Epic Games website.

It says we can get Fornite on the Epic Games App. 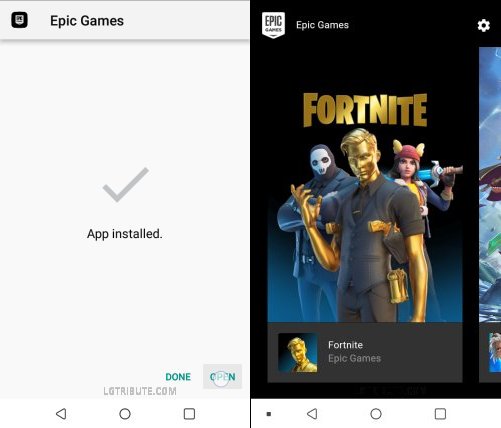 The Epic Games installer is installed. Let’s open it.

Oh no. It’s bad news. It say’s “DEVICE NOT SUPPORTED”.

It requires Android Oreo and at least 4GB RAM. We’ve fulfilled one criterion but failed in the other.

Let’s try to install the modded Fortnite apk on Tribute Empire. It skips the device check.

I’ve downloaded the Modded Fornite apk and I’m going to install it via the File Manager.

The apk file is “Fortnite_Latest-signed.apk”. I got this apk from the xda forums.

We have to enable “allow unknown apps” to proceed with the installation.

Unfortunately, the installer gives this error – “App not installed”.

I even uninstalled the Epic Games Installer, it still throws the same error.

We are out of luck. LG Tribute Empire & Dynasty are not compatible with Fortnite as of now.

Scroll back to top