Will LG Stylo 6 get an Android 11 update? Today this question is even more relevant as it’s in the news that LG will stop making phones altogether in the coming months.

There are at least 10 different variants of LG Stylo 6 based on the different carriers.

They all were launched with Android 10 out of the box and are awaiting the Android 11 update.

In this post, we are going to update the Stylo 6 android version by installing the latest available software and also going to check the Android 11 update status. So let’s get going –

In most cases, the black screen is the result of a bad LCD. However, a software glitch can also cause turn your screen black. Let’s find the root cause and try to fix our Stylo 6 as per the below troubleshooting guide –

There can be 3 scenarios. Your phone turns on but the screen remains black. The screen keeps turning off every now and then. The phone is completely dead. It’s not turning on at all.

We need to make sure if the phone is on or off. Try ringing yourself from another phone. If your phone rings but the screen remains black then the phone is on.

You can also bring your phone to a dark environment and test the LCD. If it’s emitting light then the phone is on.

If your Stylo 6 is not turning on, please head over to the below troubleshooting guide –

LG Stylo 6 not turning on

There are 10 different variants of LG Stylo 6 based on the different carriers.

Apart from the Factory unlocked variant, the rest are locked for their respective carriers. To use your Stylo 6 device with any GSM carrier worldwide, you need to unlock it first.

In this post, we are going to learn how to unlock LG Stylo 6 for free as per the below tutorial –

The unlocking method varies from carrier to carrier. There are 2 ways to unlock a Stylo 6 device. You either need to use a unlock code or a device unlock app. Let’s check out the different ways of unlocking a Stylo 6 device –

I bought a used Stylo 6 MetroPCS from eBay. I tried to unlock it using the device unlock app. It got unlocked in one go. Let’s see how to do this  – 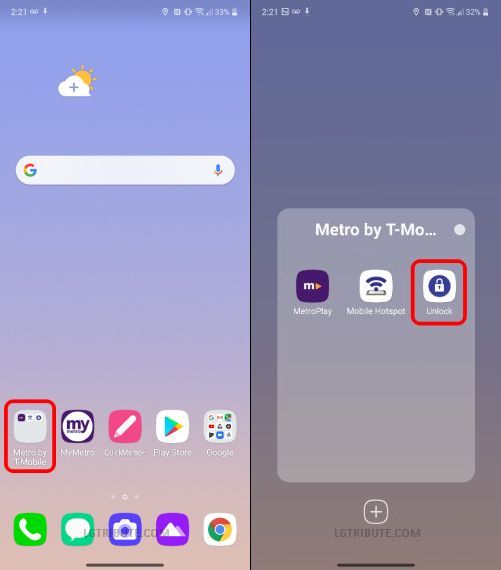 Open the “Metro by T-Mobile” folder located on your Stylo 6 home screen.

In this folder, you’ll find an app named “Unlock”. Tap it to open.

Scroll back to top